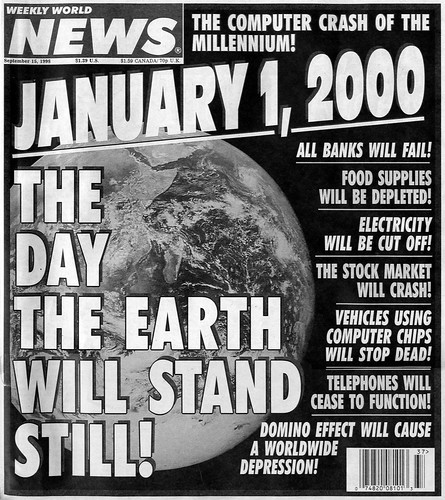 There are always theories flying around about as to when our world might end. Many people believed that the world would cease at the turn of the millennium but over a decade later we’re still here. Now we are (possibly) up against it again as history tells of 2012 being the year the earth will be no more (again.) It all hinges on the Mayans Long Count Calendar, a time measurement system that is said to have had spiritual significance within their culture. The calendar was organised into several cycles, the last of which will (if interpreted correctly) end in December 2012. Some people believe the Mayans had discovered that following 2012, the world would end and so did not incorprate any other dates into their system. Though we may tend to take these beliefs and ideas with a pinch of salt however, there are many who do still take a great interest in these rather far out therioes, so much so that in 2009 a blockbuster film was made on the subject. Here is a rundown of the most popular theories claiming the world will end in 2012, some which are vaguely feasible and some which seem downright silly. Some believe the suns alignment will alter leading to fires which will engulf the earth. There is some truth in this as the suns magnetic field goes through a cycle which is due to peak next year. Scientists believe the peak will be bigger than any beforehand and a huge solar flare will be emitted from the suns atmosphere. However, they also believe that any flare will not nearly be large enough to reach the earth millions of years away so you can relax; the earth probably won’t be barbequed just yet! Interpretations of the Christian Bible reveal that the date for Armageddon, the final battle between Good and Evil, has been set down for 2012. Some readers of the I Ching, also known as the Chinese book of Changes, say similar things, as do various interpretation of sections of the Hindu teachings. So, if some practitioners from several different religions believe the same thing, should we be dismissive or take note? Another idea that has been thrown around for years is that an asteroid is lurking, waiting to crash into the earth. Now, the 2012 theories have given conspiracists the opportunity to drag this one up again. Yes, there is an asteroid out there, it even has a name – Apophis. We have known about it for years and there is no real chance of it ever coming near to the earth any time soon. In fact its next close approach is 2029, even then it is nowhere near us and it is being tracked every minute of the day so if it happens to change it’s mind, we will know about it well in advance.

For some time there has been the belief that a planet called Nibiru will collide with earth in December 2012. The collision will either obliterate both planets or generate a huge amount of rubble which will rain down on Earth and kill everything in its path. There is a small hiccup with this theory however. Nibiru does not exist. No one has ever seen it and astronomers believe it is simply made up.

In some 2012 doomsday prophecies, the Earth becomes a death-trap as it undergoes a “pole shift.” This will occur when the planet’s crust suddenly shifts due to a gravitational pull and the landscape becomes irreparably damaged. The effect would supposedly be similar to an earthquake, volcano and tsunami all in one! Take care!

This apocalyptic collection of possibility was brought to you by Thorpe Breaks; Official hotel provider of short breaks to Thorpe Park (at least in 2012).