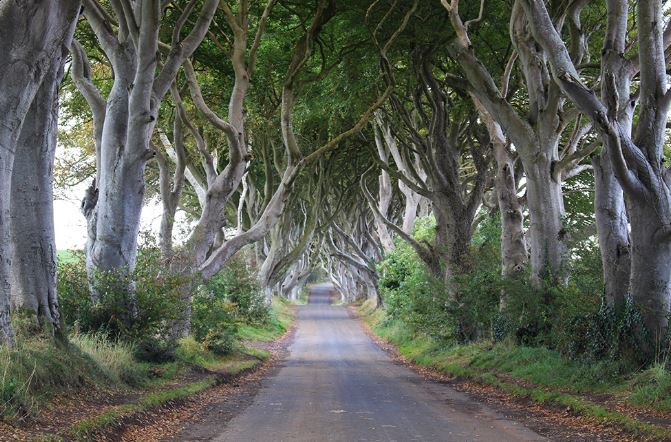 This magical tree tunnel is truly a place you should walk through at least once in your lifetime. Known as “The Dark Hedges,” if it looks familiar, that’s because it was used as a setting on the hit show “Game of Thrones” in season two, episode one, when on the King’s Road, Arya Stark escaped from King’s Landing and was disguised as a boy. She is with Yoren, Gendry, Hot Pie and others who are to join the Night’s Watch, in a cart, traveling north on the King’s Road.

One of the most-photographed, yet least-visited, places in Ireland, this avenue of ancient beech trees along the Bregagh Road near Ballymoney in County Antrim was planted over 200 years ago. The trees were originally intended to enhance the avenue leading to the Georgian magnificence of Gracehill House, owned by the Stuart family. Whoever had the original idea was truly a visionary, as the full glory of a beech avenue would not be visible in their lifetime because the trees take so long to grow.

Today, the avenue has become a public road, and the mansion is part of a golf course. The trees edge vast farming fields, so there has been no development or houses built along the avenue, allowing the trees to be appreciated in all their magnificence.

Photographers have long sought out the dark hedges because of the way the branches intertwine and the sunset lights the whole avenue with a stunning glow. As you walk toward them, it almost feels as if they’re pulling you in with some kind of otherworldly energy.

For the best photos, get there at sunset – or arrive very early in the morning before other’s arrive.