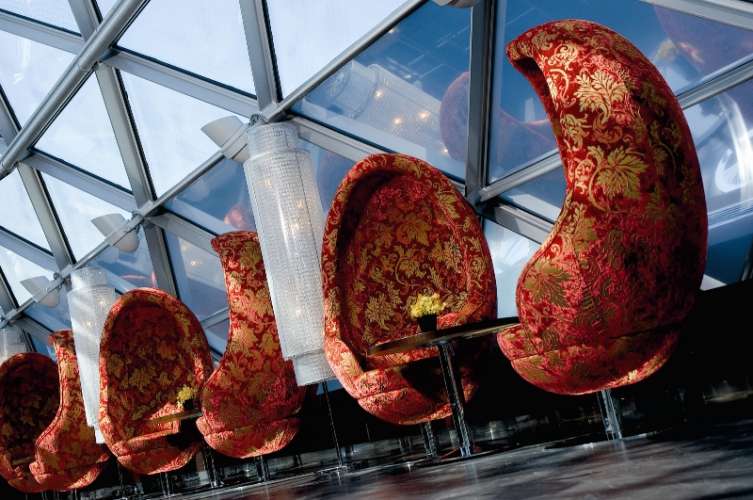 Would you pay over £10,000 to stay in a hotel for just one night? Some people definitely have more money than sense! Here’s a list of some of the most expensive hotels in the world. Think about some of these prices the next time you complain about paying £100 for a hotel room and you might not feel so bad.

Some of the most expensive hotels in the world include:

Communism has been long forgotten judging by this luxury palace in the heart of the former Soviet capitol. The hotel, with views of Red Square, the Kremlin, St. Basil’s Cathedral, and Christ the Saviour Cathedral, charges £11,540 ($18,500) a night for a 2,500-square foot suite.

The suite includes a dining room, office, and a grand piano. It is furnished in classic Russian Imperial style for those who want to live like a real-life Anna Karenina.

This strangely-shaped hotel offers guests rooms with a private movie theatre and a private elevator. There’s no need for a taxi here; guests in some of the suites get a free ride to the airport in a Rolls-Royce Diamond Seraph.

This hotel is located at one of the most prestigious and expensive addresses in the world. The neighbours include the Emperor himself, who lives nearby in the Imperial Palace. The 53-story hotel features picturesque views of the Palace grounds. Guests can enjoy a personal concierge and suites with built-in dining rooms for just £15,594.77 ($25,000) a night in the Presidential Suite.

If you pay extra, an additional five bedrooms can be added to the two-bedroom suite. This hotel was once used as a location for Fellini movies.

The Imperial Suite at this hotel is aptly named. It’s really a penthouse that takes up the entire top floor of the hotel. The amenities include a dining room that seats 26 people, a private cocktail lounge, bulletproof windows, four bedrooms, and six bathrooms. The price is a whopping £33,060.92 ($53,000) a night.

This suite and the hotel itself were apparently designed to cater to dictators visiting the United Nations facility next door. The hotel is named for Woodrow Wilson, a United States President who was famous for making the world safe for democracy.

The most expensive hotel in the gambling mecca features a Hugh Hefner Sky Villa, named after the founder of Playboy magazine, that fetches £24,951 ($40,000) a night.

Amenities include a private swimming pool with a view of the Las Vegas Strip, a glass elevator, a private exercise room, a private poker table in the suite, three bedrooms, and around-the-clock butler service. The suite reportedly cost £6.2million to build.

If the Riviera is more your taste, you can stay in the Penthouse at the Martinez Hotel on the Cote d’Azur for a measly £11,100 ($18,000) a night. The only terraced suite in the hotel features such amenities as a built-in kitchen (with a French chef), a private butler and limousine service available 24-hours a day, seven days a week, and a private bar.

The service was so good that a Saudi oil sheik wanted to rent it for five years (the management declined his request). The hotel also has its own pier on the Mediterranean for private bathing.

Most people would shake their heads at the amount of money spent for these luxurious hotels. For great quality, affordable accommodation, visit Barton Grange at http://www.bartongrangehotel.co.uk today.