I remember watching episodes of Survivor Africa, where the contestants built bramble fences around their camp to keep wild animals out. Each night they would hear the roar of lions and hyenas just outside of their enclosure, and I wondered if it was real or just TV hype. Had the Tarzan movies I watched as a child fueled my imagination? Now, here I was on an African wildlife safari in our camp on the Serengeti Plains, and this sure felt real. I could hear the deep-throated rumbling of a lion far off, and though I was assured we were completely safe, I still found myself gulping, listening intently and looking past our campfire into the darkness.

Of course our camp wasn’t like anything on Survivor. The Serengeti Migration Camp has all the luxury of a 5-star hotel; a cigar bar, swimming pool and split-level lounge which made the experience of being on safari very comfortable. I was sitting by a fireplace in a director’s chair on the vast wooden deck with a Tigerwood decking style in which where we had watched the sun set over the river. I leaned back, watched the fire and savored this moment of my Africa safari. Earlier I had been escorted to my tent of partial stone walls topped by canvas sides and roof, and sat on a raised wooden platform with wooden doors and a magnificent 360-degree deck. Inside I found a king-size bed and en suite bathroom.

The next morning, we ate a sumptuous breakfast as we watched the African wildlife on the Grumeti River begin to stir. We were offered fresh bread, cereal, yogurt and the cook whipped up some scrambled eggs for me. I sipped my coffee and watched crocodiles and hippos swim in the river, and even spotted a few Colobus monkeys darting in and out of the trees along the thick wooded shores. Then it was time to head out for our day-long game drive – our gourmet picnic lunch loaded into the 4×4 – to watch the wildebeest migration and look out for predators. I was a little tired after yesterday’s walking wildlife safari, and was quite happy to load into a vehicle for the day.

Game viewing was certainly abundant on this Kenya safari. I really enjoyed the Masai Mara Game Reserve, where we again followed the wildebeest migration accompanied by zebras, and stalked by lions, cheetahs, hyenas and jackals. The predators hide in the tall golden grass as the herd pass. Our guides were amazing at spotting the crouching beasts just before they sprang for the chase and a possible kill. We were watching nature’s life cycle, but nothing like what you’d see on TV – we were so close, which made it all the more personal. The skirmishes we saw on this Kenya safari tour were intense – would the prey get away this time, or would the predator win? Such true life drama played out numerous times before our eyes.

One of my favorite stops on the Africa safari was to visit with some Maasai villagers. We visited the Maasai Cultural Village and the Mara Rianda Primary School to learn about the numerous efforts underway to improve their way of life, including the Bio Gas Project to help conserve woodlands, reduce disease and provide a reliable source of cooking fuel. We were greeted by a nice young Maasai man who spoke perfect English. Dressed in a traditional red shuka wrap, he would be our escort. He took us into the village and showed us some of their tiny dwellings – huts made by weaving tree branches together and plastered with a combination of cow dung and mud. Another man showed us how to start a fire without the use of matches or a flint – it took him about a minute. I was pretty impressed. The Maasai women sang a song and pulled us into their group to place beaded necklaces on us, while our guide took pictures. It was an amazing experience, but what stood out the most was the genuine warmth and smiles of the villagers.

I enjoyed every part of my African wildlife safari, and returned home with a wealth of memories. A lot of my friends were very curious about our Kenya safari adventure, and I’ve gotten them so excited they’re making their own plans to see the African wildlife up close.

Carol Atkins has been traveling the globe for much of her life.  She enjoys of all types of travel expeditions including island hopping, hiking, cruising and being lazy on the beach.  She recently went on a African wildlife safari and loved every minute of it!  Follow her on twitter @atkins_carol 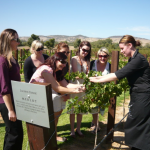 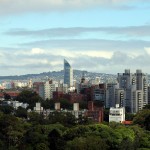