A graceful volcano never known to be active suddenly caused a city’s ruin—not with fiery ash but with a devastating flood of mud and water.

In the autumn of 1541 the town of Ciudad Vieja, the first capital of Guatemala, was destroyed by an upheaval that no one could have foreseen. The majestic cone of the volcano Agua, towering some 7,000 feet (2,100 meters) above the city nestled at its foot, showed no signs of activity, nor has it ever actually erupted in the centuries since. Yet in the early morning hours of September 11, 1541, the volcano unleashed a devastating torrent of destruction that engulfed the entire city.

According to an early account of the catastrophe, it had been raining steadily for three days before disaster struck. Suddenly, at 2 a.m., the earth began to shake with violent tremors. It was then that a wall of mud and water surged down the mountainside, uprooting trees and sending boulders hurtling down the slopes. Ciudad Vieja was buried by the torrent, and by the time the violence ended, more than 1,000 people had been killed.

Agua, or the “water volcano,” was named for this strange and lethal flow of water and mud. Scientists attribute its occurrence to a fatal combination of unprecedented rainfall and violent earthquakes. Three days of heavy rain had filled the volcano’s summit crater to overflowing and at the same time transformed the loosely packed ash and debris on the slopes into a sea of mud. The earth tremors caused a breach in the crater rim, and the escaping water triggered the mudflow that engulfed the town.

Located in southern Guatemala, Agua is but one in a long chain of volcanoes that run parallel to the Pacific coast from Mexico through Central America. (Agua’s neighbor Fuego, meaning “fire;’ is the most active volcano in Guatemala.) Rising to an elevation of 12,310 feet (3752 meters) above sea level, Agua is distinguished by its strikingly symmetrical slopes that curve gracefully down to the surrounding valleys. Agua is also notable for the relatively small size of its crater: the interior walls are only about 325 feet (100 meters) high, and in one section they are only 40 feet (12 meters) high. It was through this notch in the crater’s rim that the torrent of water escaped in 1541, carving a channel that is still clearly visible down the mountainside.

As with other volcanoes, those same slopes are covered by exceptionally fertile volcanic soil. Sugarcane, coffee, and corn are cultivated on the mountainsides, while near the top Agua is still mantled with tropical forest. Visitors frequently have walking holidays to the now-tranquil summit for superb views of the surrounding countryside. 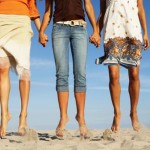