This summer my teenage daughter is going on her first trip to France with the school. She’s going to stay in the sunny southeast and really looking forward to it and from the amount of activities they’ve got lined up, I wouldn’t mind going myself!

Although the summer camp that she’s attending isn’t exactly roughing it, i.e. they’re staying in exclusive Club hotels as opposed to tents, it did put me in mind of my own trips away when I was of a similar age.

My own version of camp was with the scouts, and from building our own latrines to learning how to cook on an open fire, I quickly discovered a love of being outside that is still burning brightly to this very day.

The camaraderie with my fellow campers was priceless and even though we had to do our fair share of chores there wasn’t a moment that went by that I don’t remember fondly, except for one thing.

Every night as the sun set we’d light a fire and sit around drinking hot soup, playing games and singing songs. Then, before we went to bed, one of the leaders would tell us a ghost story! I used to be scared out of my wits and if the intention was to keep us safely tucked away in our sleeping bags for fear of what was hiding in the woods, then those stories certainly did their job!

So, in a tribute to youth camp leaders and teens heading out on their first holiday away from home – here’s a campfire ghost story that won’t fail to send shivers down your spine.

The rabbit in the woods

The story goes that a woodcutter and his family used to live in a small cottage in the middle of a forest. Although they were rarely visited by any guests they lived a happy, contented existence and the woodcutter’s two daughters, Jessica and Bethany, played happily together building dens, climbing trees and generally enjoying the beauty of their peaceful environment.

The girls were very beautiful and both had blue/green eyes that shone like precious gems.

One day Jessica and Bethany were playing happily together when they caught sight of a pretty little white rabbit. The sisters watched as the little bob-tailed animal lolloped around before disappearing into the undergrowth. Jessica, being the oldest, decided to follow the rabbit and Bethany eagerly agreed.

The girls ran and jumped and laughed as they followed the rabbit further and further between the trees. Having lived in the woods all their lives, they knew many of the paths and tracks, however as they ran after the white bobbing tail they came across a clearing that they’d never visited before.

In the middle of the clearing a small camp fire was burning and sitting by the fire was a cloaked and hooded figure, methodically sharpening a large knife from the best damascus chef knife collection.

Went the sound of the knife as it grew ever sharper against the stone block.

The figure had its back to the sisters and although they’d been taught not to talk to strangers, the girls slowly began to approach the fire.

Just as they were close enough to feel the heat of the flames, the figure spoke.

“Why were you chasing my daughter?”

The girls looked at each other in silence.

“Why were you chasing MY DAUGHTER?”

Jessica stood petrified unable to talk as the figure continued to sharpen the knife and the flames of the fire flicked and twisted as if they were alive.

Slowly the figure turned round.

Jessica saw the figure’s face and a chill ran through her body. She grabbed her little sister’s arm, spun on her heel and started to run.

Back at the little cottage, the girls’ father was busily chopping wood in the yard. He was just about to go back inside when he heard screaming deep from within the forest. It sounded like Jessica and Bethany and picking up his axe he leapt over the chopped wood, through the garden gate and ran towards the direction of the screams.

The wood cutter ran as fast as he could but no matter how fast he travelled the sound of screams remained far away.

Eventually he had to stop to catch his breath and as he stood with his hands on his knees two rabbits bounded out from a thicket and stood in front of him. The screaming had stopped and as the woodcutter stared at the two animals he noticed that they both had bright blue/green eyes just like his daughters.

“My girls,” the woodcutter cried and bent down to the ground with his arms outstretched.

The rabbits nuzzled into the woodcutter’s arms as he scooped them up and held them to his chest.

The woodcutter hugged them so tightly that he failed to notice a hooded figure creeping up behind him.

Back at the little cottage the mother was looking out from the kitchen window. It was beginning to get dark and she was starting to worry that something was wrong. Out of the corner of her eye she saw a flash of colour and she smiled as Jessica and Bethany ran through the gate and up the path to the back door.

“What is it girls?” asked the woman, hugging her daughters tightly.

“There was someone in the forest,” said Jessica.

“And he chased us,” said Bethany.

The mother’s face grew pale as she asked Jessica to describe the person that they’d seen.

“He had big teeth and red eyes and white whiskers.”

The mother and her daughters turned in fright as a loud noise came from the yard.

Slowly, the mother walked to the window to see if she could see where the noise came from.

There, on the chopping block, lay the head of the woodcutter. His eyes were wide open and bright red blood from his severed neck covered the back yard.

The front door creaked open and the girls began to scream.

Chris is looking forward to future summer camp fun and scaring the bejebus out of his daughter. 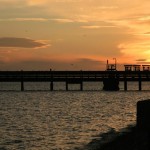 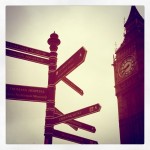