Like most major North American cities, Toronto is a work in progress. This city by the lake is an organism that is made up of many parts. What is today called Toronto, the new “mega city”, started out as an amalgam of dozens of individual communities. The city in its present form is barely fifteen years old. Under it’s mayor, merchant-turned-politician Mel Lastman, Toronto now comprises those former cities and boroughs that make up the whole.

These cities-within-a-city were in turn made up of yet other communities that had been swallowed up in previous amalgamations. To natives of the city, names like Swansea, Mimico, Leaside, and Forest Hill will bring back memories of days gone by. Spread out among these communities are some of the landmarks that, while not household names elsewhere, are treasured by the people here.

Probably the most recognizable monument in Toronto is the CN Tower. Torontonians will tell you, without much coaxing, that it is the tallest free-standing structure in the world. The Guinness Book of Records said so. At the base of the of the “tower” is the Skydome with it’s retractable solid roof. A short distance away is the onyx colored glass Roy Thompson Hall, Toronto’s world class concert center. Also in the same area but in the opposite direction is the Air Canada Centre affectionately called the “hangar”.

These are the well known symbols of a modern and vibrant city. Also in this group is the North York Performing Arts Centre (formerly the Ford Center for the Performing Arts). This magnificent complex is located in the former City of North York. North York, now part of the new “mega city” was called “north” to distinguish it from that other “York”, the city that became the original city of Toronto in 1834. The original focal point of York, founded in 1793, was a fort logically enough called Fort York.

The Air Canada Centre is among other things the new home of Toronto’s Hockey Team, The Maple Leafs. Fittingly enough, just up the street is the Hockey Hall of Fame. This institution has found a home in a beautifully restored bank building, built in the 19th century, which used to house a branch of the Bank of Montreal. It is located at the corner of Yonge and Front streets. In Toronto, that’s about as downtown as it gets. While we are in the area, let’s check out some other old landmarks. Heading west along Front Street, we soon find ourselves in front of the Royal York Hotel. Built in 1929, this imposing edifice was at the time the largest hotel in the British Commonwealth.

Directly across the street is another mainstay Union Station. Recalling an age when railway stations were the cathedrals of transportation, this tribute to grandeur certainly lives up to its calling. Begun in 1913 but not completed until August 6, 1927, Union Station although still used as a transportation hub, stands today as a symbol of a bygone era. If you don’t mind a little stroll to the east to about Church street you will come upon Toronto’s Flatiron Building. Built by a distiller (Gooderham) in 1892 it has a very distinctive architecture.

On your way to this building you might have noticed Sony Centre for the Performing Arts (the Hummingbird Center). This 42 year old facility with 3,155 seats is the largest of it’s kind in Canada. Ah, the memories! Moving right along, one block further east lands you at the St. Lawrence Market complex which was the subject of a previous article.

A long brisk walk, west on King Street (the north end of the St. Lawrence complex) until you come to Bay Street. Bay Street is Toronto’s version of Wall Street. Heading north on Bay Street for several blocks you eventually arrive at Queen Street. At the intersection of Bay and Queen you are confronted by Toronto’s city halls, the old one and the “new” one. The old city hall, situated on the north east corner is a heavyset Romanesque affair. It was designed by Edward James Lenox in 1885. The “new” City Hall, a dainty lady by comparison, was designed by Finland’s Viljo Revell. It was completed in 1965.

After drinking in these two architectural statements you can travel east along Queen Street until you arrive at the Eaton Centre. As thrilling an experience as this gargantuan shopping complex might be, our real destination is a church which is almost buried by the Centre. Called the Church of the Holy Trinity it runs counter to what most people think of as church. The Toronto based group, Cowboy Junkies, recorded their first album here. Built in 1847 this oldest of Toronto churches is worth a visit if only for its unique location.

Samet Bilir writes about technology trends, camera reviews, and photography, such as Velbon Tripods and Panasonic Lumix G X Vario. To read more articles from him visit his website at chi-photography. 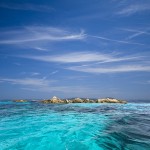