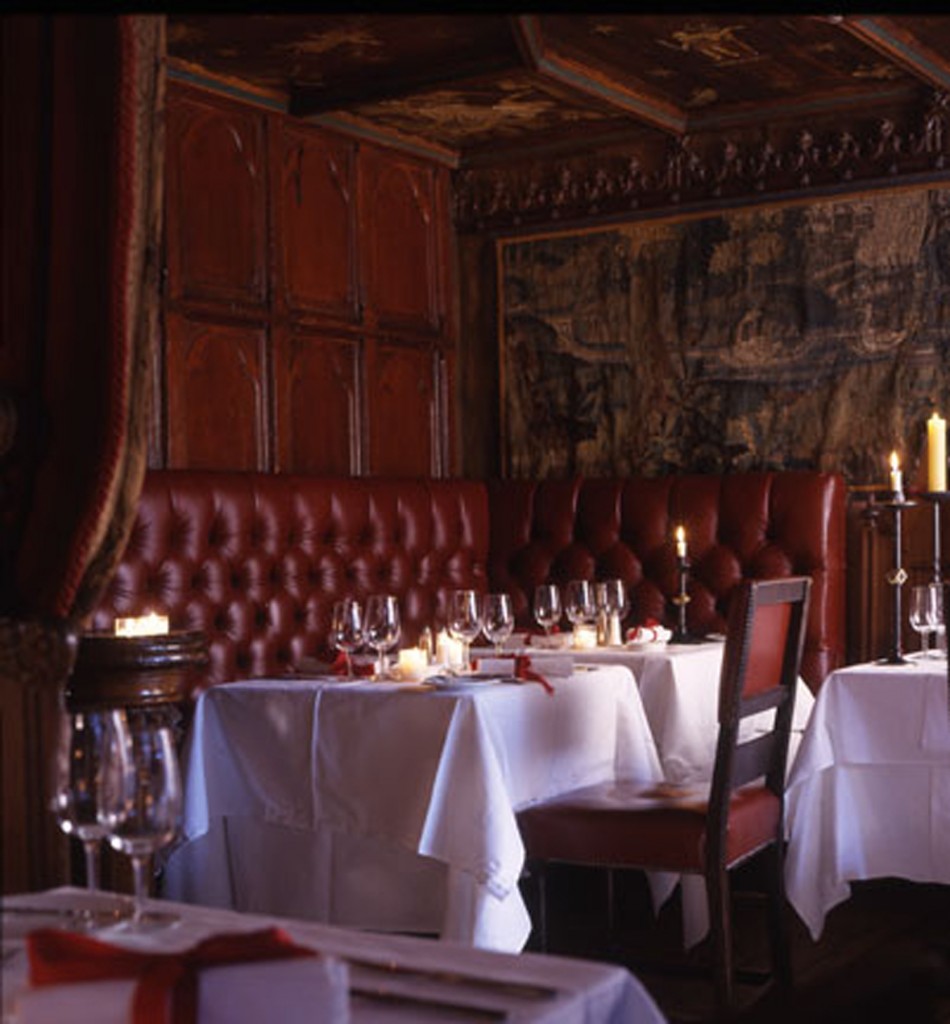 Though the Celtic peoples of Scotland were long ago converted to Christianity, traces of the Pagan past can still be found, even among the most popular tourist destinations. Whether you want to connected to Pagan ancestors, to Scotland’s history of witchcraft in the Middle Ages, to the spirits who haunt its castles, or to its fairies, these destinations will help you make the most of Pagan Scotland.

Eat in the Secret Garden dining room, and you’ll notice the ceiling is covered in symbols of the Tarot. Some claim the rambling, romantic grounds of the elegant restaurant and inn are haunted by the restless souls who died during medieval witch hunts. Between 1470 and 1722, Castlehill claimed more than 1,000 victims, many of whom were burned at the stake. The building that now houses The Witchery is also said to have been a meeting place for the rakish Hellfire Club, early proponents of freedom of religion.

If you do dine at The Witchery, expect to pay $35-$65 per plate for dinner entrees. Find the eatery online at http://www.thewitchery.com/. Reservations are recommended.

Speaking of the spirit world of Scotland, another popular tourist destination with deep, and perhaps spiritual, roots is Glamis Castle in Angus (http://www.glamis-castle.co.uk/), in Scotland‘s Tayside region. Long associated with the royal family, the castle has been in Queen Elizabeth II’s family since 1372. Glamis Castle is also famed for its Shakespearean associations: in the play, MacBeth was thane of Glamis. The historical Duncan died there, not from murder, but as a result of wounds suffered during a hunting accident.

A very old legend surrounding Glamis Castle is that is was originally supposed to have been built on nearby Hunter’s Hill. Builders began the work, but during the night, the fae folk would remove the stones. Eventually, the builders gave up and tried again at the castle’s present location.

The castle is widely reputed to have a secret room. Supposedly, when towels were hung in each of the windows and the castle was then viewed from outside, spectators saw windows without towels in them. This mysterious chamber is sometimes associated with an earl (perhaps either Alexander Lyon, 2nd Lord Glamis, or Alexander Lindsay, 4th Earl of Crawford) who, unable to find a partner to play cards with him, proclaimed he would play with the devil himself. The devil promptly appeared, and the earl is said to have lost his soul in the game. It’s rumored that only the current Lord of Glamis and his heirs know the location of the secret chamber, and that the secret it contains is so horrifying that to look into it is to go mad.

Whether or not it has been visited by any demons or faeries, Glamis Castle is also a hotbed of ghostly activity. It is said to be haunted by a ghost known as The Grey Lady. Others have seen the ghost of a young woman without a tongue. There are also rumors of a vampire-like child born to the heirs of Glamis and secretly kept in the castle. A less frightening legend is attached to the chapel: it’s said that there, James VIII used to cure the local people of scrofula.

For those wishing to get in touch with this ancient haunt of the spirits, Glamis Castle is open to the public Mondays through Saturdays all year round. Admission is approximately $14 per adult, or $41 for a family ticket. Ticket prices include some access to the royal apartments, and also to the beautiful surrounding gardens.

Two sacred sites associated with the fairies are also two of the most beautiful nature-observing locations in Scotland. If you visit the Highlands city of Inverness, visit Tomnahurich, a wooded cemetery hill west of the River Ness. Meaning “hill of the yew trees” in Gaelic, Tomnahurich is the burial place of Thomas the Rhymer. He is not dead, according to local folklore, but rather sleeping along with his men and white horses, ready to come to the defense of Scotland when the country needs him. It is also said to be one of the places where the Fairy Queen holds court. If you should spend an hour with the fairies, a hundred years or more of human time may pass during an hour of fairy time.

Northwest of Inverness lies the Black Isle peninsula. The Black Isle town of Rosemarkie boasts Fairy Glen. At 1.75 miles (3 km), it’s perfect for a walking tour, or at least a ramble. The sights include two scenic waterfalls and The Dens, a set of earthen pillars created by water erosion. Historically, the local children would clean and bless the pool and sprinkle it with flower petals every Sunday to ensure the fairies would keep the water clean.

Among the Outer Hebrides is the Isle of Lewis. It’s one of the northernmost islands of Scotland, and is famed for its nearly 4,000-year-old monoliths. There are several ancient sites with prehistoric monuments on the isle, but the most famous, and elaborate, of them are the Callandish (“Calanais,“ in the original Gaelic) Standing Stones. The stones were arranged in the shape of a Celtic cross 1,800 years before the dawn of Christianity, with a burial cairn in the middle.

The astronomical significance of the stones has not been definitely identified, but it is believed they align with the moon above a certain mountain on Midsummer Night. Local folk legends speak of the mysterious “shining one” who walks among the stones on Midsummer at dawn. Another local legend claims the stones were once the local giants who, when they refused to convert to Christianity, were petrified by Saint Kiernan.

The Isle of Lewis can be reached by ferry. Visitors arrive at the town of  Stornoway, and from there can reach the Standing Stones by bus or taxi. It’s an approximately fifteen-minute ride. Discreetly near the stones (but out of sight from among them) is the official Visitor Centre, with restroom facilities and a café. Contact the Visitor Centre at http://www.callanishvisitorcentre.co.uk/.

The fairies also feature prominently in the lore of Ireland. Ireland is a sacred place for worshippers of the Goddess as well. The ancient tomb of Newgrange is a monument to the goddess Oenghus, and Saint Brigid’s Cathedral, before it was Christianized, belonged to a powerful Celtic goddess.

About seventeen miles northwest of Dublin, Newgrange is Ireland’s answer to the Callandish Standing Stones. In the case of Newgrange, the astronomical significance of the site is clear. A thousand years older than Stonehenge, it is said to be the world’s oldest solar observatory. Like the Callandish stones, Newgrange is a tomb, and the chamber is perfectly aligned with the sun at Winter Solstice. The meaning of its intricate, geometric carvings is still unknown. Sometimes referred to as a sidhe, or fairy mound, Newgrange was also associated in ancient times with Celtic Oenghus, the goddess of love.

Newgrange can be accessed through Bru na Boinne (Palace of the Boyne), the local visitor center. Visit them online at http://www.knowth.com/bru-na-boinne.htm. Be sure to call ahead for tickets, as they sometimes sell out during the busy season.

Further to the south, in Kildare, St. Brigid’s Cathedral is two monuments in one. The church dedicated to the Catholic saint, supposedly the founder of a convent and monastery in the fifth century, is built at the site of a shrine to the Celtic goddess Brigid (or Brighid). Brigid, the great Irish goddess of poetry, arts, the livestock and the crops, was worshipped here at the site of a sacred oak tree. The name of Kildare comes from Cill Dara, meaning “Church of the Oak.”

When you visit the Cathedral, you’ll also find Brigid’s fire temple, where in ancient times the priestesses of Brigid kept a sacred fire burning. The local people’s devotion to Brigid was so ingrained, the practice survived into Christian times; nuns took over for the priestesses in keeping the fire.

The Cathedral has no phone number accessible to the public, but is open from May to September.

Ireland is full of megalithic structures dating back to prehistoric times. There are standing stones, royal tombs, and other monuments near the villages of Raphoe, Ballycrovane, Dooncarton, Glandore, Kenmare and Punchestown, among many others. They are all worth visiting, but an area especially rich in history and ancient spirituality is The Burren, a wilderness in County Clare. (There are many regions in Ireland referred to as “The Burren;” the name is derived from bhoireann, which simply means “a rocky place.”)

The Burren has great diversity of animal and plant species, including many rare flowers, and is worth visiting for its natural beauty alone. It also has sites like Poulnabrone, or “Hole of the Sorrows.” This tomb was the site of elaborate burial rituals where the dead were laid to rest with weapons, crystals, and numerous shards of pottery. A little farther north, near the village of Carron, is the limestone wedge tomb of Gleninsheen, another rich archeological site .

Walking tours of The Burren are available year-round; contact Burren Hill Walks at http://homepage.eircom.net/~burrenhillwalks/, or visit http://www.irishcyclehire.com/ for information on renting a bicycle for a self-guided tour.

Whether you wish to commune with the spirits of ancestors, honor the Pagan past, celebrate the fair folk, invoke dark magic, or honor the Goddess, Scotland and Ireland are full of interesting and enlightening sights. This list is but a small sampling; let it serve as a starting point on the way to your unique journey.

“Callanish Stones.“ http://en.wikipedia.org/wiki/Callanish_stone_circle. (Note: this reference was used only for the folkloric reference and not for its factual information.)

“Glamis Castle.” http://en.wikipedia.org/wiki/Glamis_Castle. (Note: this reference was used only for the folkloric reference and not for its factual information.)